Fethaland is the most northerly point on Mainland Shetland. Although considered remote today, it was once a bustling centre of activity, especially during the summer fishing season. Its location as a fishing station was chosen as it lay a little closer to the fishing grounds, far out to the north. Sitting on a narrow neck of land between two bays, a visitor today sees the remains of numerous drystone buildings, the former lodgings for boat crews, shops that supplied essential materials and buildings to store fish and salt. 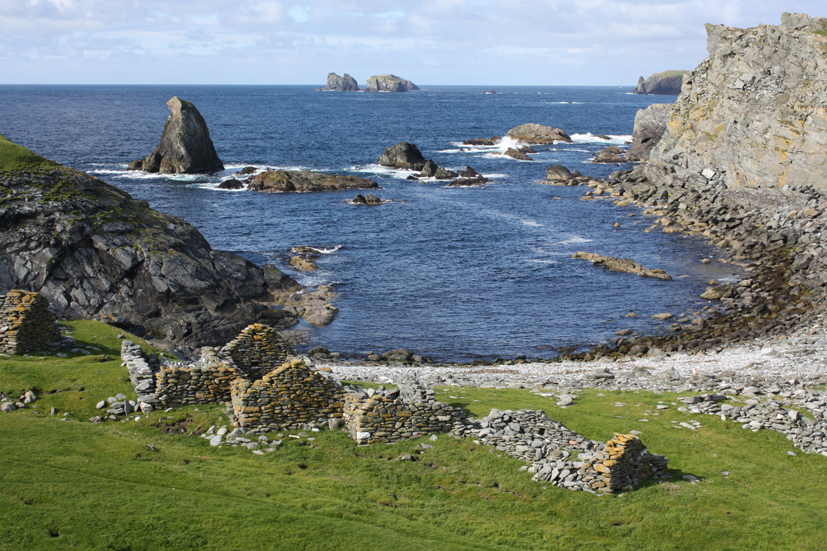 Many of the boat crews consited of seasonal fishermen, who left their crofts over the summer to take part in haaf (deep sea) fishing. They rowed many miles out to sea, dropping lines to catch cod and ling. Often out at sea in open boats for days at a time, the crew brought the fish back to the fishing station where they split, dried and salted.

Interactive view of the Fethaland Fishing Station (click and drag mouse to look around).

The fishing station was once the busiest in Shetland, with around 60 boats. The workers lived in lodges, drystone buildings with roofs that could be removed at the end of each season. An entire boat’s crew would occupy one small building. After days out at sea, the modest lodges would provide welcome shelter.

Inside one of the lodges (click and drag mouse to look around).

Fishing from open boats stopped at the end of the nineteenth century, a combination of the introduction of bigger, decked boasts with steam engines and a series of fishing disasters that led to the deaths of many boat crews. The Gloup disaster was one that affected Fethaland – and this video featuring Douglas Murray, the last person to be born at the fishing station, briefly tells of life at the station, and its sad end.

To see the web version of the Fethaland Fishing Station model – download the viewer.

To see the full version of the model, and to see actual artefacts and boats from the fishing stations, visit the Shetland Museum in Lerwick.